TRICARE is a health insurance provider for uniformed service members, retirees, and their families. TRICARE was formally known as the Civilian Health and Medical Program of the Uniformed Services. It is a healthcare program of the United States Department of Defense Military Health System. The TRICAREprogram is primarily managed by the Defense Health Agency and operates a system that provides services to over 9.4 million beneficiaries. In 2017, Tricare overhauled their behavioral health benefits, which now includes coverage of substance abuse treatment. The expansion during 2017 also began providing coverage for opioid treatment programs. Among uniformed service members, retirees, and their families are some who are struggling with substance abuse and addiction.

A TRICAREhealth plan may cover residential treatment, detox, outpatient services, intervention programs, therapy and counseling, medication-assisted treatment, or medical detox/withdrawal management. However, individual plan details, where the person is seeking help, legal requirements, and the method or type of treatment, determine what is accessible for each person. Drug addiction often destroys families financially, and being a uniformed service member or retiree; it will be a matter of time before the problem catches up. TRICAREhealth insurance plans help alleviate some of the financial burdens and ensure the proper type of treatment is gotten. 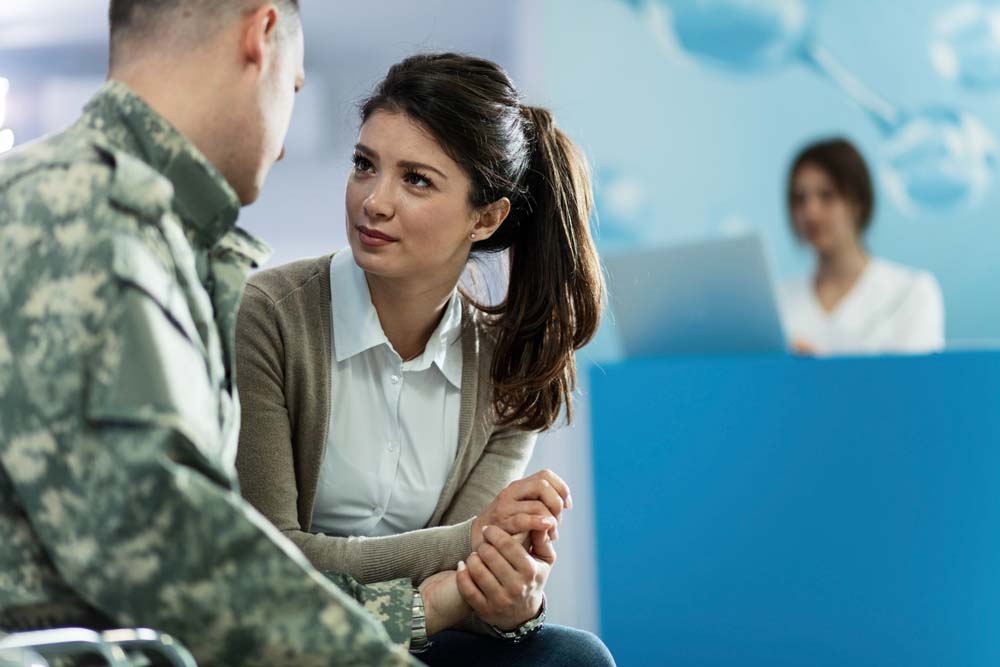 TRICAREis similar to other medical insurance plans when compared to the types of policies they offer.  Health plans are available to ensure that each individual and their family have the proper coverage they need for their specific medical needs.  TRICAREprovides eleven various plans to choose from.

The services that are covered by TRICARE are not all-inclusive and are primarily services that are medically necessary and considered proven, such as proven rehabilitation methods.  The extent of coverage depends on the plan for select providers approved by the insurance company.  For example, in-network providers have existing agreements with TRICARE regarding pricing and billing for addiction treatment.  Someone who is attending a drug rehab program may only have to pay a small portion of the cost.  However, if an out of network service provider is chosen, the patient may have to file an individual claim and pay a higher percentage.  If you or your family are unsure of what your coverage is, it is always best to contact your TRICARE health insurance provider.

TRICARE covers emergency inpatient hospital services, where it is a medical emergency, or the person requires immediate hospital admission.  Additionally, if the problem involves a substance abuse addiction, the coverage for emergency inpatient hospital services includes detox, stabilization, and assistance with medical complications.  Emergency treatment is when the individual requires immediate medical attention.  For example, withdrawal symptoms requiring medical care, such as opioid withdrawal symptoms.  Non-emergency treatment is for someone who is deciding to seek help for substance abuse on their own, without medical or family intervention.  The coverage for formal residential drug rehab does depend on the type of plan.  There may be service providers within the network to choose from, but many families often go out of network due to more selection.

Before any inpatient or outpatient substance abuse treatment, there is detox or withdrawal management.  TRICARE health plans cover the management of withdrawal symptoms.  For example, if a patient is going through inpatient or outpatient treatment, the initial detoxification process would be covered by the health plan.  TRICARE health plans also include opioid treatment programs for persons struggling with opioid addiction.  The abuse of prescription opioid medication has been a continuous issue across the United States, and impacting uniformed services members, retired service members, and their families.  TRICARE plans also cover medication-assisted treatment, which is a process utilizing buprenorphine and or suboxone in combination with behavioral therapy.  A person may qualify if they have an opioid addiction, require a medical detox, or need medical support due to the opioid addiction.

According to the National Institute on Drug Abuse, there are risks of developing a drug addiction among uniformed service members and retired service members.  For example, the stresses of deployment and the unique culture of military life offer risks and protective factors.  There have been countless situations where deployment has led to heavy drinking, drug use, and risky behavior.  There is still a stigma attached to addiction within the military; despite many changes, there are numerous uniformed service members who will not come forward.  However, when compared to the civilian population, illicit drug use among military personnel is much lower.  Yet, prescription drug use and binge drinking are relatively high when compared to the general population.

Per a Congressional Research Report, from 2009 to 2016, the number of new substance abuse addictions has been on a declining trend among active duty service members.  In a 2015 survey, approximately 0.7% were using illicit drugs, 4.1% were misusing prescription drugs, and roughly 30% were binge drinking alcohol.  Excessive drinking and binge drinking has a significant impact, but the prevalence of substance abuse is lower than the general population.  However, opioid pain medication is prescribed at a higher rate for service members, when compared to the general population.  Yet, the rate of dependence and addiction involving opioids has declined by 38% among uniformed service members between 2012 and 2016.

According to the United States Census Bureau, in 2018, approximately 8.5% or over 27 million Americans did not have health insurance.  From 2017, this was an increase of over one percent of the population who did not have coverage.  Between 2017 and 2018, the percentage of residents with public coverage decreased by 0.4%, yet the rate of people with private coverage did not change.  In 2018, individual health insurance coverage continued to be more prevalent across the nation.  Those with private health insurance made up over 67% of the population.  Employer-based health insurance coverage remained the most common, such as TRICARE health plans covering uniformed service members.  Between 2017 and 2018, the number of residents covered by Medicaid decreased by 0.7%.  Additionally, the number of people covered by Medicare increased by 0.4%.  Between that same time, the number of people with employment-based coverage or direct purchase coverage did not change.  For example, this includes TRICARE and VA or CHAMPVA health care plans.